The 53rd village drinking water borehole pump was installed at  Mtola in  January  2020. The village is located in Chief Zumwanda in Lumezi District South of Lundazi in the  Eastern Province of Zambia.

It is difficult to appreciate the impact of these 52 borehole pumps on the lives of the people in the villages since most of us live ten thousand miles away (16,093.00kms) from the most remote of these villages in rural Zambia in Southern Africa. I had that rare opportunity and honor to see what these borehole pumps mean to the lives of the men, women, and children in the villages.

During three days over the Christmas Holidays in December 2015, I had an opportunity to visit a few of about 16 borehole pumps that had either been already installed or some were in the middle of being installed. These boreholes are located in the Western part of the Lundazi district of the Eastern Province of Zambia in Chief Magodi’s area. Lundazi town is 474 miles (764.00kms) from 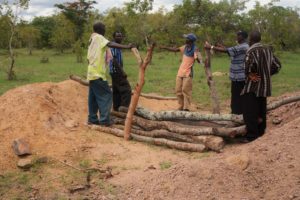 Zambia’s Capital City of Lusaka. Since it was during the rainy season we needed a four wheel drive pick up truck to reach some of the most remote villages.

The starting point or the ground zero for the borehole pumps in the area was Zibalwe Village the home of the organizer Mr. Vincent Tembo. The project first started with installing the first pump at Zibalwe Village. The procedure was a Headman surrounding villages would request for borehole pump to be installed since the village was ready. The village will have organized for the women to provide the water, the river sand, and cooking of food. The men from the village were to provide the red pan bricks and labor for making the cement rings for the well, building the heavy concrete cover of the well, and the installation of the pump. Since the beginning the borehole pumps have spread further away from the ground zero.

On the first day we drove to several nearby villages such as  Kamzati, Chitamba, and several others. On the second day we drove to Boyole School to the  borehole pump  and also the pump for Chipewa Village. We then took a long 50 mile drive to a remote village of Mthwalo located a few miles from the border with neighboring country of Malawi. This trip took us all day. This village had a remarkable story that was typical of all villages. Mthwalo had owned a series of 2 to 3 water pumps for that single village. All lasted for a short while because they broke and the village could not get spare parts to fix the pumps. They had no source of clean water for the whole village when they heard about  project from Zibalwe Village.

When I arrive there, if found that the water well had been d 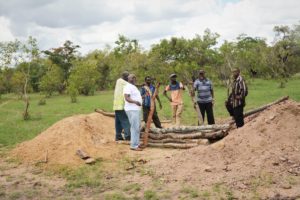 ug. But before the cement rings and the pump could be installed, people layed  some longs across the open well. They used a rope to begin drawing the using the water. When news got around people from about 4 villages from as far as 3 to 4 miles away were coming to this well already to obtain some clean fresh drinking water. People were so thankful that a borehole pump was going to be installed.

A Drinking Water Borehole Pump being installed at Chikoya Village in the Lundazi District of rural Zambia.

The Zambia Drinking Water Borehole Pump Project was established in 2014. It has provided 50 drinking water boreholes to more than 50 villages in the Lundazi District of Eastern Zambia. Sometimes one pump might provide clean drinking to more than 5 villages.
Here’s YouTube a clip to show how the Limbalimba Borehole project was completed.

During the four year period since the inception of this borehole pump project, 52 borehole pumps have been installed to provide fresh clean drinking water to more than 52 villages. This may be a total population of an estimated 15,600 men, women, and children. Virtually all the 52 wells serve more than one village. Many resident from the surrounding villages will walk many miles to draw clean drinking water from any of the 52 borehole pumps. More villages await the installation of a water pump once funds are made available.